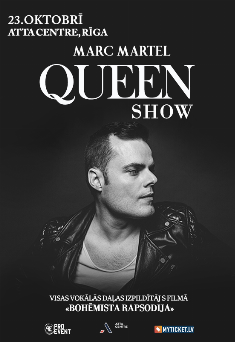 For the first time in Riga - QUEEN SHOW by Marc Martel

For the first time in Riga - QUEEN SHOW and MARKS MARTELS! Mark Martel is a unique phenomenon - he does not just sing like Freddie Mercury, imitating his manners and vocal intonations to the smallest nuances. He is also visually very similar to the legendary "Queen" soloist. It is not for nothing that critics call Martela the reincarnation of Mecuria. In turn, the famous "Queen" drummer Roger Taylor chose Mark to participate in the film "Bohemian Rhapsody", in which the voice of Mercury Rami Maleks sings in his voice. In 2011, Mark Martels performed an excerpt from the song "Somebody To Love" in a competition organized as part of the Queen Extravaganza project. That was enough for the young singer to enchant not only the listeners, but also the "Queen" musicians. Martela's video collected about 9,000,000 views. After the sensational release of the film “Bohemian Rhapsody” in 2018, a new wave of popularity of “Queen” hit the world, but the invaluable contribution of the band members to the history of music and culture was finally appreciated in the homeland of musicians. Mark Martel's life has changed dramatically since then. Mark is called a peer or reincarnation of a rock legend and a unique showman. He is not only associated with Freddie Mercury's visually similar facial features and captivating timbre. Mark has an indescribable charisma and he perfectly copies the stage movements of Mercury. This is confirmed not only by the admirers, but also by the long-term members of the group "Queen" - guitarist Brian May and percussionist Roger Taylor. It was they who chose Martela as the soloist of the official "tribute" project "The Queen Extravaganza". By the way, Mark Martels has put his hand or, more precisely, his voice in making the film. It was he who performed Mercury's part in the film, helping Rami Malek to shine as a legendary musician. All his concerts are a huge success, but tickets for them are sold out in literally a few days. Now the people of Latvia also have a unique opportunity to enjoy the performance of Mark Martela and the legendary hits of the group "Queen" within the world tour of the show "QUEEN SHOW". Don't miss the opportunity to hear Freddy Mercury's voice, which is identical in writing! More information: http://www.facebook.com/pg/ProEventRiga

The online shop service fee in the amount of 0.50 € has been added for each ticket.